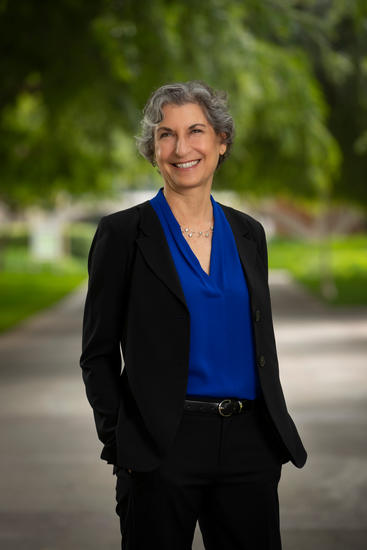 About the Provost and Executive Vice Chancellor

Elizabeth Watkins became Provost and Executive Vice Chancellor at UC Riverside on May 1, 2021. As Provost and Executive Vice Chancellor, Watkins is the chief academic and operating officer for the campus, providing leadership to the entire academic enterprise, managing day-to-day operations of the university, overseeing resources allocation, and serving as a member of the campus leadership team. In the Chancellor's absence, the Provost serves as UCR's chief executive officer.

Since joining UCR, Watkins has lead a restructuring of the university's financial governance, putting in place a larger and more broadly representative Campus Finance Committee. She also helped oversee a safe campus return after the COVID-19 pandemic and has drafted a strategic plan that will guide central campus initiatives through 2030. Watkins works closely with constituencies across campus to set overall academic priorities for the university. In addition to meeting people where they work, she holds regular office hours for faculty, staff and students to hear their ideas.

Watkins came to UCR from UC San Francisco where, after eight years as professor and director of graduate studies in the history of health sciences, she was appointed Dean of the Graduate Division in 2012 and Vice Chancellor of Student Affairs in 2013. Her accomplishments at UCSF included the growth of an endowment fund for PhD students in the basic sciences from $50 million to $100 million, the development of a cost-of-living supplement program to provide students an annual supplement to defray the high cost of Bay Area housing, and the successful ten-year WASC re-accreditation of the university. During her time on the faculty, she served on numerous campus and system-wide Academic Senate committees, including the Committee on Academic Personnel, the Graduate Council, the Coordinating Committee on Graduate Affairs, and the UC Press Editorial Committee.

Watkins earned a BA in Biology and a PhD in History of Science at Harvard University. Her research has focused on the interrelations of medicine, science, commerce and culture in the United States in the 20th-21st centuries. She is the author of On the Pill:  A Social History of Oral Contraceptives, 1950-1970 and The Estrogen Elixir:  A History of Hormone Replacement Therapy in America. She is also the co-editor of three other books and has written numerous articles on the histories of birth control; prescription drugs; estrogen and female aging; testosterone and male aging; and stress and disease.  Her work has been funded by the National Endowment for the Humanities, the NIH/National Library of Medicine, the National Academy of Education, the National Science Foundation and the University of California President's Research Fellowship in the Humanities.

Born and raised in Rhode Island, Watkins has lived in Concord and Cambridge, Massachusetts; Pittsburgh, Pennsylvania; and San Francisco.  She and her husband live in Riverside.  She has two daughters, one stepson, and one grandson.